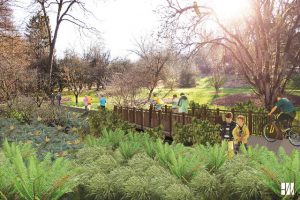 In 2016, construction of the Arboretum’s new multi-use trail got underway. The trail is part of the 2001 Arboretum Master Plan and is being paid for by mitigation funds from the SR 520 rebuild.

Construction of the West Approach Bridge North (WABN) phase of the new State Route 520 Bridge in the Arboretum has begun. This project will connect westbound-traveling vehicles, transit, bicycles, and pedestrians from the new floating bridge across Lake Washington to the Montlake area. Eastbound traffic will continue to use the existing structure until the West Approach Bridge South is fully funded and built. 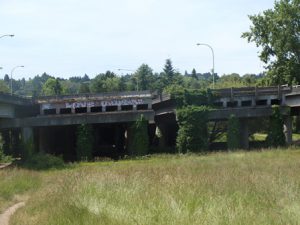 “Ramps to Nowhere” in the Arboretum.

At a press conference in the Graham Visitors Center on January 24, 2013, the Washington State Department of Transportation (WSDOT) and the Arboretum and Botanical Garden Committee (ABGC), which oversees capital projects at Washington Park Arboretum, announced that they had signed a historic agreement ensuring the implementation of key projects in the Arboretum’s Master Plan as required mitigation for the effects of the upcoming replacement of the SR 520 Bridge.

Foundation Advocacy for Arboretum on 520 Bridge

BACKGROUND
For the past several years, the Arboretum Foundation has been advocating strongly on behalf of Arboretum interests in the debate over the design and construction of the new SR520 bridge. In September 2009, our Board of Directors adopted a formal statement entitled Guiding Principles and Priorities for 520 Expansion, outlining the Foundation’s position and requesting that any proposed design plan for the bridge minimize environmental impacts on the Arboretum and preserve its historic features and collections.

These priorities were echoed in the Guiding Principles for 520 Expansion adopted by the Arboretum and Botanical Garden Committee (ABGC)—which includes representatives from the Foundation, UW, and City of Seattle—in December 2009. These principles stated that the 520 project in and around the Washington Park Arboretum should:

1. Enhance the Arboretum through the design, construction, and operation of SR 520 and the SR 520 I-5 to Medina Bridge Replacement and HOV Project;
2. Avoid harm to the Arboretum and its collections;
3. Respect the historical, aesthetic, and design integrity of the Park;
4. Fully compensate the Arboretum for loss of property and function if harm is unavoidable;
5. Reduce traffic on Lake Washington Boulevard below levels that exist today on the boulevard between Montlake Boulevard and East Madison Street; and,
6. Preserve and restore the Arboretum as an accessible place of quiet and respite.

A SUCCESSFUL CAMPAIGN
In early 2010, the Foundation worked with a coalition of public officials, neighborhood groups, and environmental organizations to advocate for a more context-sensitive and sustainable bridge design than the preferred option put forward by the Washington State Department of Transportation (WSDOT). By the summer, this advocacy began to bear fruit. Then-Governor Christine Gregoire and WSDOT released an updated bridge design that:

• Removes all current ramps from the Arboretum and obviates the need to build new ones;
• Eliminates general purpose on-ramps from Lake Washington Boulevard to the 520, reducing traffic impacts on the Arboretum;
• Includes a traffic management plan to reduce traffic flow on Lake Washington Boulevard below current levels;
• Calls for the use of “quieter” pavement on the bridge’s main line going across the Arboretum to reduce noise levels;
• Creates good pedestrian and bicycle connections among the Arboretum, the 520, and the Montlake and University neighborhoods.

MITIGATION PLANNING PROCESS
During the summer and fall of 2010, ABGC met with WSDOT officials twice a month to discuss alleviating and mitigating the effects of the bridge replacement on the Arboretum. Based on these discussions, WSDOT submitted a report to the state legislature on December 22 listing potential Master Plan projects in the Arboretum that might be funded by the department as part of mitigation for the project. These included wetland restoration, daylighting of Arboretum Creek, development of a multi-use trail along Lake Washington Boulevard, and support for traffic calming measures on the Boulevard. Read the full Arboretum mitigation plan on the WSDOT website.

WSDOT and ABGC continued to meet, and in March 2011, they negotiated a non-binding Memorandum of Understanding identifying the mitigation projects in the Arboretum, clarifying their scope, and outlining the roles and responsibilities of the each of the parties involved.

Over the next year, WSDOT and ABGC met regularly to develop the plans and budgets, to and prepare a “term sheet” that would contain binding committments on the projects to be funded and the amount of money WSDOT would commit to each one.

A SIGNED AGREEMENT
At a press conference in the Graham Visitors Center on January 24, 2013, WSDOT and ABGC announced that they had signed a historic agreement ensuring the implementation of key projects in the Arboretum’s Master Plan as mitigation for the effects of the upcoming replacement of the SR 520 Bridge. See “Latest News” above.