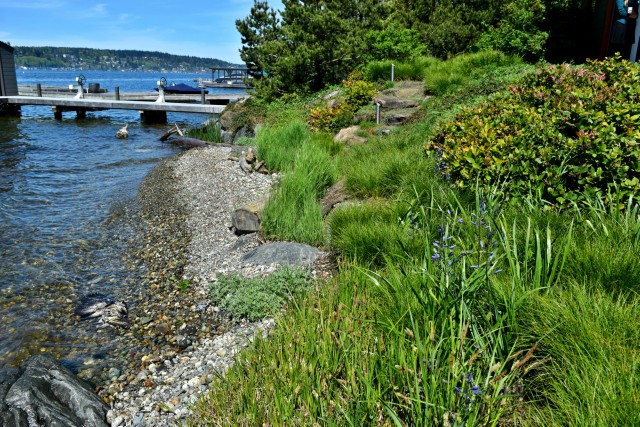 Native camas blooming by the restored shoreline at the Bendich residence.

A sustainable garden is a connected one. It fosters ecological linkages within its own boundaries and to the larger landscape surrounding it. Among other practices, sustainable gardeners grow locally native plant communities that mirror those in nearby natural areas and greenways, so that their gardens can act—on a smaller scale—as sanctuaries and conduits for wildlife conservation.

But what about when homes and gardens bump up against the sea or a lake? In the Puget Sound region—with its big, beautiful bodies of water—this is a relatively common occurrence. What’s the eco-friendly way to connect a garden to a shoreline?

I found out earlier this year, when I visited the Bendich residence on the shores of Lake Washington, in Kirkland. I was attending a media event for a new program called Green Shores for Homes. Managed by Washington Sea Grant—based out of the UW College of the Environment—the program provides incentives to homeowners interested in restoring natural shoreline on their properties. It awards LEED-style points for sustainable practices such as reducing impervious surfaces (like asphalt or concrete), treating water runoff, planting native riparian vegetation, and removing bulkheads.

Bulkheads are basically shoreline retaining walls, and many homeowners on the Puget Sound and around our larger lakes construct these walls to protect their properties from wave-related erosion. (Scientists estimate that a quarter of the Puget Sound’s 2500-mile shoreline is armored with sea walls.) But bulkheads sever the natural connection between land and water. They create turbulence that actually erodes the beach in front of them and starves the shoreline of habitat for invertebrates, birds and fish.

In most cases, bulkheads are not even needed, and a contoured beach, softly armored with some boulders, logs and native plants, provides all the protection against erosion or flooding that a shoreline home needs. A “green shore” is a true win-win: It not only helps restore the ecological health of the land-water interface, but also provides the homeowner with benefits such as beach access and a beautiful space to interact with nature.

And that’s exactly what I found at the Bendich home. The garden is magnificent—a brainchild of the award-winning landscape designer Paul Broadhurst (broadhurstassociates.com). Before it got its makeover, the garden was a relatively sterile landscape dominated by a lawn running between the house and the lakeside bulkhead. Broadhurst worked with the Bendich family to transform the yard into a naturalistic shoreline filled with native shrubs, prairie grasses and wildflowers. 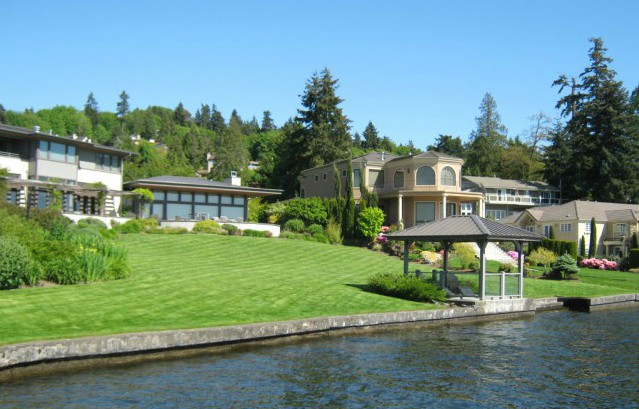 BEFORE: The Bendich shoreline prior to restoration. (Photo by the Watershed Company)

Inspiration for the garden came from a number of sources. Pam Bendich told me about how she and her husband, Albert (now deceased), visited the restored shoreline at the Olympic Sculpture Park and were captivated by the idea of removing bulkheads to benefit marine birds and juvenile salmon.

To help the family envision the shoreline garden and plantings, Broadhurst took them on a kayak trip to the Nature Conservancy’s Yellow Island Preserve, in the San Juan Islands. The small island is famed for its intact native grasslands and springtime wildflowers, which run right up to the water’s edge.

Broadhurst removed 150 feet of bulkhead and a shoreline gazebo, along with the lawn and some ornamental shrubs. He then re-sloped and revegetated the riparian area with native plantings and re-contoured the shore with a mix of cobble and gravel, adding a layer of spawning gravel to enhance shallow water habitat for salmon. Boulders and large woody debris were also added to the gravel beach to attenuate wave energy and add habitat complexity.

“There is now a seamless progression from an ornamental landscape nearer to the house to a much wilder, natural one at the living shoreline,” says Broadhurst. “The homeowners value and enjoy this. They now think of their landscape as ‘habitat’.”

The restored shoreline garden has gotten rave reviews and lots of media attention. It also became the pilot project for Washington Sea Grant’s new Green Shores for Homes program, a cross-border collaboration with the Stewardship Centre for British Columbia. 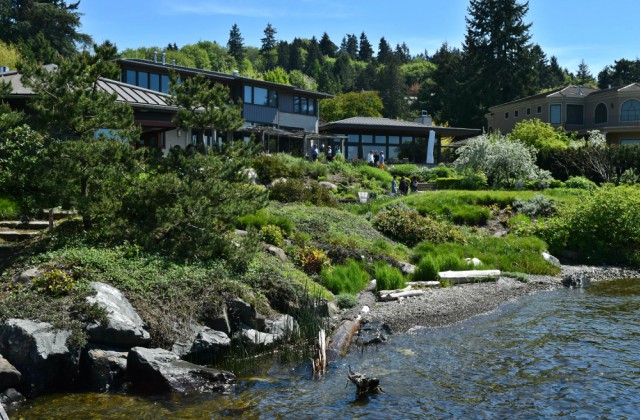 AFTER: Bendich shoreline after the restoration.

Funding to create the program came from the U.S. Environmental Protection Agency through its Puget Sound Watershed Management Assistance Program, says Sea Grant’s coastal management specialist, Nicole Faghin. “We hired a team of specialists who used the best available science to create the technical credits and points system for the program.”

Homeowners earn points—and a final rating—in four main categories: “shoreline physical processes,” “shoreline habitat,” “water quality” and “shoreline stewardship.” A detailed explanation of the rating system and application process can be found in the “Green Shores for Homes: Credits and Rating Guide,” which is published on the website greenshoresforhomes.org.

The Bendich home earned a “Chinook” or level-1 rating, garnering points in all four rating categories. Green Shores for Homes is building momentum; Faghin and company have so far certified four properties in Washington and three in B.C. New projects are getting underway at homes in Seattle and Mason County.

Local governments are getting in on the action, too. In spring 2017, the City of Kirkland became the first jurisdiction in Washington State to officially embrace the Green Shores for Homes program. Christian Geitz, a planner with Kirkland’s Planning and Building Department, was initially drawn to the program when he trained as a verifier for it.

“I quickly realized how well the goals of the program work with Kirkland’s current codes and line up with our Shoreline Master Plan for removing bulkheads and restoring natural, dynamic and active shores along Lake Washington,” says Geitz. “I also like the idea of how the program will connect natural shorelines all the way from our lakes out to the marine environment.”

Green Shores for Homes also dovetails nicely with “Green Shorelines,” a guidebook produced by the City of Seattle. It offers tips for lakeshore homeowners about green shoreline practices (including green dock designs), and information on estimating restoration costs and getting through the permitting process.

Though not yet tied to any tax reduction plan, Green Shores for Homes does offer potential financial benefits for homeowners—at least in Kirkland—in the form of a smoother permitting process. “As with green home projects,” says Geitz, “we can offer faster review times to designers and contractors who submit plans that incorporate the Green Shores rating system.”

Add this to the bragging rights that come with Green Shores certification—not to mention beach access and the joys of watching a shoreline habitat recover—and you’ve got a suite of incentives that are tough to ignore.

Niall Dunne is the editor of the “Bulletin” and the communications manager at the Arboretum Foundation.

In addition to Green Shores for Homes, Washington Sea Grant offers a range of shoreline living and restoration programs in our region. To learn more, visit the Sea Grant website.