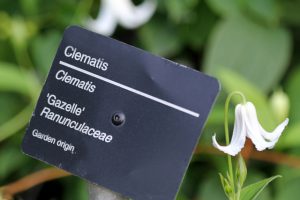 This regular Bulletin column features a Q&A selected and adapted from the Elisabeth C. Miller Library’s Plant Answer Line program. If you’d like to ask a plant or gardening question of your own, please call 206-897-5268 (UW Plant), send it via the library website, or email directly to hortlib@uw.edu.

QUESTION: A good gardening friend and I were talking about how in the world to say Agastache, and could not reach a consensus. This is a perennial question we have about other plant names, as we struggle not to embarrass ourselves when talking to the horti-cognoscenti. Are there hard and fast rules of pronunciation for botanical Latin?

I tried to wax botanical,
But they made a nasty fuss,
When I called my vine clem-AH-tis,
Instead of CLEM-a-tis.

I’ve been speaking well
Since I was five and riding on my trike,
But when it comes to flower names,
It seems my tongue’s on strike.

If I say: “How tall my DAY-lia’s grown,”
They’ll gasp: “You mean your DAW-lia!”
I don’t say African violet now,
Instead I say Saint-PAUL-ee-a.

Linguistically speaking,
I’m just a dolt
But I’m learning on the job.
And soon—like Homer’s Virgil,
I’ll be a Latin snob.

ANSWER: There are certainly many books on the subject, and I highly recommend William Stearn’s “Botanical Latin” (4th ed., David & Charles, 1992). If you have ever been chastised for garbling a plant’s scientific name (I certainly have!), I recommend quoting Stearns’ gentle reminder: “Botanical Latin is essentially a written language, but the scientific names of plants often occur in speech. How they are pronounced really matters little provided they sound pleasant and are understood by all concerned.” He says one common approach is to pronounce according to classical Latin, which does not include some of the sounds in botanical Latin. Classical Latin was itself somewhat fluid, incorporating the character of the languages of conquered cultures. Another approach is to adapt the botanical Latin to the native language of the speaker. (I was once taken to task for the way I said Phyllostachys nigra, and I replied that I speak botanical Latin with a Hebrew accent!)

About Agastache, the preferred pronunciation is “a-GAH-sta-kee,” according to “Dictionary of Plant Names,” by Allen Coombes (Timber Press, 1994). However, the “Fine Gardening” pronunciation guide says it’s “ag-ah-STAK-ee.” Emphasis on a different syllable entirely! I asked two colleagues here in the Miller Library, and each pronounced it differently from either of these pronunciations. (See the chart below for more examples of the lack of pronunciation consensus.)

Some pronunciations are just plain awkward. Are we going to swim against the current of “FYU-sha” and call the genus Fuchsia, “FUKS-ee-a”—because it is named for Leonhart Fuchs, a 16th century German physician and herbalist? This is the recommendation of the Coombes book, “Horticulture” magazine, and others. And what about Weigela, named for German botanist Christian Ehrenfried von Weigel? I most often hear people saying “why-JEEL-ee-a,” which adds an unnecessary syllable; but it’s a German “w,” and should be pronounced like a “v,” as in “VYE-guh-la.” And then there are cases like Daboecia, which a local purveyor of plants informed me was based on a misspelling of Dabeoc (the name of an Irish saint): I was just wondering whether to call it “da-bo-EE-sha,” when I learned that perhaps we all ought to say “Da-bee-O-sha”!

You could expend a great deal of energy exploring the different approaches to vowel sounds and counting syllables to determine where the accent should go—but I suggest relaxing and speaking those plant names in a way that is intuitive and comfortable. It’s more important to know the scientific names to which common names refer, and to know how those names are spelled. This is a fine way of avoiding confusion: Was that Kerria or Carya you were hoping to find at your local nursery? And don’t rest on your laurels. Get to know them: Is that Laurus or Umbellularia, Kalmia or Prunus laurocerasus? Of course, just when you’ve finally sorted out what a plant is called and how to say it, taxonomists may turn your Zauschneria into Epilobium, your Aster to Symphyotrichum! 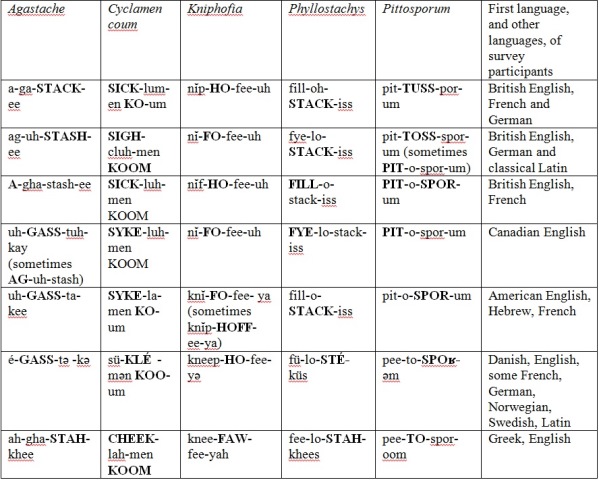 BOTANICAL PRONUNCIATIONS FROM AROUND THE WORLD
I gathered this information via in-person interviews, audio clips, and phonetic spelling via email. Thanks to the horticultural experts who participated.

Rebecca Alexander is the Plant Answer Line librarian at the Miller Library, located in the UW Botanic Gardens’ Center for Urban Horticulture (3501 NE 41st Street, Seattle). She is also a contributing editor to the “Bulletin.”