Azaleas blooming near the stream in the Seattle Japanese Garden in mid May.

The Seattle Japanese Garden at Washington Park Arboretum is one of the most celebrated Japanese gardens outside of Japan. It features a formal stroll-through garden at the north end and an informal, naturalistic woodland at the south end. These are connected by a semi-formal area in the center featuring a lake, wooden zigzag bridge, and stone peninsula.

Classical influences: Japanese master designers Kiyoshi Inoshita and Juki Iida created the plans for the 3.5-acre public garden in the late 1950s. Inoshita and Iida took inspiration from classical gardens in their homeland. Possible design influences include the Horai En Garden, Tokyo, built in the Edo Period (1603-1863). Seattle’s garden opened to the public in 1960 and has been one of the city’s major attractions ever since.

In 2007, the Foundation helped organize the fundraising campaign to create a new entry gatehouse for the Japanese Garden.

Seasonal hours: The Japanese Garden is open to the public from March to November each year. In peak summer season, the garden opens every day. In early spring and fall, it usually opens Tuesdays through Sundays only. Opening hours vary throughout the year. Regular admission for adults (ages 18 to 64) is $8.

Special events: The garden hosts a wonderful series of special events through the season, including Children’s Day, the Tanabata Festival, and Moon Viewing. 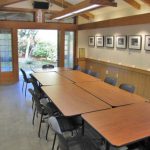 The Tateuchi Room in the gatehouse complex hosts community meetings and private events.

The Arboretum Foundation’s involvement with the Seattle Japanese Garden goes back to the beginning. We raised the money to fund the design and construction and also helped with funding for renovations and capital projects over the years.

Most recently, in 2007, the Foundation helped the Garden secure more than $1 million in funds for the construction of the new Entry Gatehouse. Major gifts included $200,000 from the Tateuchi Foundation and $125,000 from the Paul G. Allen Family Foundation. Matching funds of $450,000 from the 2000 Pro Parks Levy and other generous donations helped bring the project to fruition. The gatehouse opened to great fanfare in the spring of 2009.

In January 2016, the Seattle City Council unanimously approved legislation transferring the support role for the Garden to the Arboretum Foundation. Read more about this historic “return home” for the Japanese Garden.

Unit 86: Arboretum Foundation volunteer unit 86—the Prentice Bloedel Unit—formed in 1967 to provide leadership in sustaining the Japanese Garden. Today, unit members train as docents and provide public and private tours of the garden throughout the season. They also help out with garden maintenance, event support, and some retails sales.