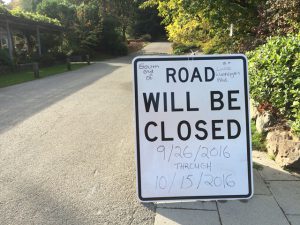 Access to and from the Arboretum at the south end of Arboretum Drive will be closed until October 15.

On Monday, September 26, as part of the construction of the new Arboretum Loop Trail, Ohno Construction began to tear up and replace the south end of Arboretum Drive East. This access point to the Arboretum—restricted to pedestrians and cyclists—will be closed through October 15, 2016, to build a key connection for the trail.

Cyclists coming from Madison Park will need to continue down Lake Washington Boulevard East and enter the Arboretum at the north end via Foster Island Road.

The Arboretum remains open during the construction of the trail, and the Parks Department is asking visitors to follow detour routes. We know construction can be difficult, and we appreciate your patience as we make improvements to the Arboretum.