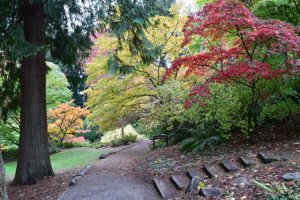 Woodland Garden in the Arboretum

On October 10, we sent a message to our members and friends about the Arboretum Foundation Board’s decision to oppose a controversial City Council bill that would allow public camping in Seattle parks and greenways, as part of a solution to the City’s growing homelessness crisis.

Many of our readers wrote back to tell us of their shared concerns and to let us know that they had contacted the Council directly to voice their opposition to the bill. Our voices have not gone unnoticed!

The pushback from the public and local interest groups has been so strong that it’s now unlikely any action will be taken on the bill.

In its place, Mayor Ed Murray, working with Council members Tim Burgess, Sally Bagshaw, and Debora Juarez, has proposed a new initiative increasing the number of safe, authorized encampments in the City for people living unsheltered. It would also improve outreach services, and access to restrooms and showers, for the homeless, as well as ensure better encampment cleanup protocols.

No camping will be permitted in city parks, on sidewalks, or in any areas that might put tent campers at risk (such as steep slopes).

The new encampments are not meant as a solution to the homeless crisis, but rather as a patch until more long-term plans are in place. Read more in these reports by MyNorthwest.com, King5, and Seattle Met. The mayor is set to release a detailed plan very soon.

Thank you to everyone who joined with us to oppose the bill and help protect the Arboretum! A special thanks to Tim Burgess for leading the opposition to this bill in the Council.