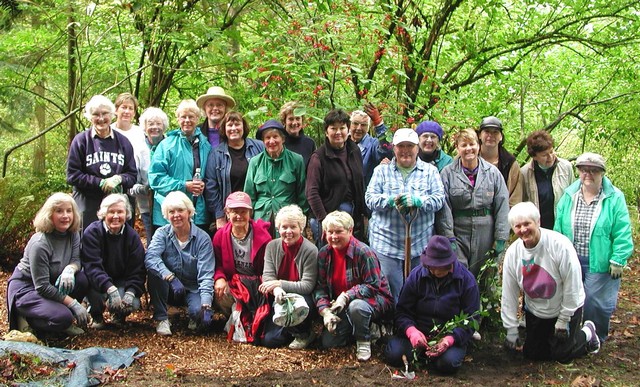 At our 2019 Opening Night Party & Auction on February 19, we will be honoring the efforts and accomplishments of the Arboretum Foundation units. It would be difficult to imagine the Arboretum we all love and cherish today without the hard work and dedication of our unit members. We owe them a debt of gratitude.

The Arboretum Foundation units have been described as study circles, garden clubs, and some of the most influential grassroots leaders within our Arboretum community. They are groups of women, and sometimes men, who coalesce around a love of plants, gardening, and good company—and “translate that common interest into active support of the Arboretum” (Arboretum Bulletin, Spring 1963).

Background on the Units

The story of the units is almost as old as Washington Park Arboretum, which formed in 1934. Unit 1 was created in the late 1930s by Juanita Graham, the wife of Donald Graham, one of the original founders of the Foundation. She modeled the units on the guilds of the Seattle Children’s Hospital to enable women to become more actively involved with the Arboretum.

From the beginning, the units would meet regularly, study and promote horticulture, and raise money for—and public awareness about—the Arboretum. During the annual Work and Fun Day, hundreds of unit members would come to Arboretum to pull truckloads of weeds; it was like today’s Day of Caring event—but with comedy hats! 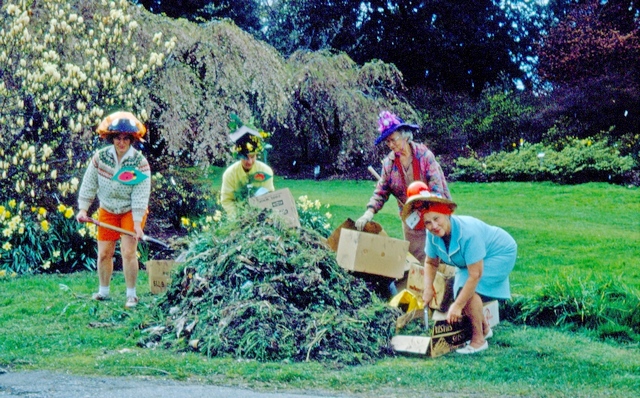 The Unit Council—a coordinating body comprised of officers from each of the units—met on a quarterly basis and developed many of the Arboretum’s most successful programs. These include the Foundation plant sales, the Garden Guides (for the Arboretum and Seattle Japanese Garden), the Saplings (school tours) Program, the Arboretum herbarium, and the Pat Calvert Greenhouse (see “Units Timeline” below.)

In the 1960s and 70s, the Unit Council developed innovative outreach programs to area schools, hospitals, and nursing homes. Volunteers would bring “treasure boxes” filled with soil and plants into classrooms, pediatric wards, and retirement communities to cultivate a love of plants and provide horticultural therapy to those in need. 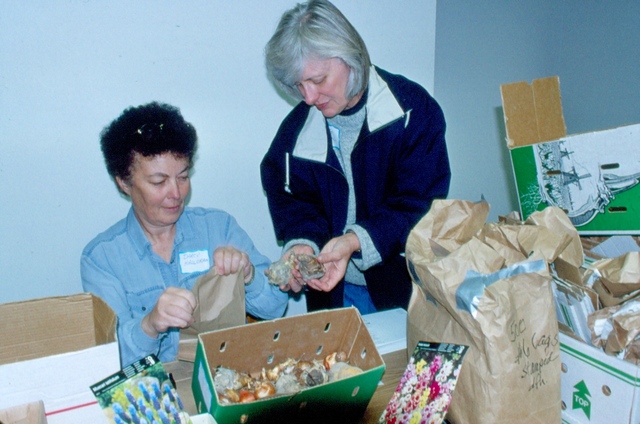 The plant sales at the Arboretum were legendary—in the scale of the effort involved and the quality of the plants on offer. Months of planning were involved, and volunteers traveled to nurseries far-and-wide to find the best and most unusual plants. An article in the Arboretum Bulletin of 1966 reports that 200 people from 58 units donated 1,050 hours of work to the sale that year. And until Opening Night Party came along in the late 1980s, the sales were the most significant fundraising events for the Foundation and the Arboretum. (For instance, the 1966 sale netted $7,300 for the Arboretum.)

Through their own smaller events, and by collecting monthly dues, each unit would raise important funds for the Arboretum. Over the years, many, many gifts in the range of $30 to $300 dollars paid for maintenance equipment, plant material, park benches, office supplies, color maps of the park, books for the Arboretum library, travel expenses for staff, and more. Each year, the Unit Council would award a trophy to the unit that contributed the most service to the Arboretum.

Today, although some units have retired, 14 remain active and provide valuable support for Foundation events and activities. Unit 86 continues to lead guided tours of the Seattle Japanese Garden. The units also continue to raise important funds! Just this past year, Unit 26—the Lillian McEwan Unit, based on Bainbridge Island—donated $12,500 to pay for a new planting bed on Azalea Way and also to sponsor the 2019 Opening Night Party. 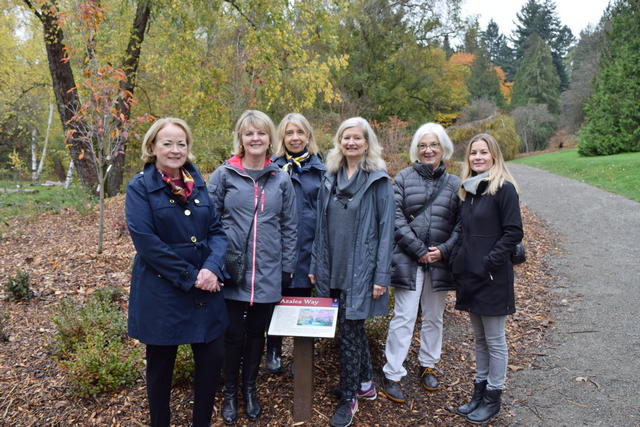 Thanks to our units for all they have done and continue to do for the Arboretum!

Late 1930s—Unit 1 created by Juanita Graham. She modeled the units on the guilds of the Children’s Orthopedic Hospital.
1947—The Unit Council (a coordinating body comprised of officers from each of the units) planned and produced the first Arboretum Plant Sale—the Foundation’s key fundraising event for many decades.
1957—The units’ annual Work and Fun Day brings 300 volunteers (in funny hats) to weed and care for the Arboretum. 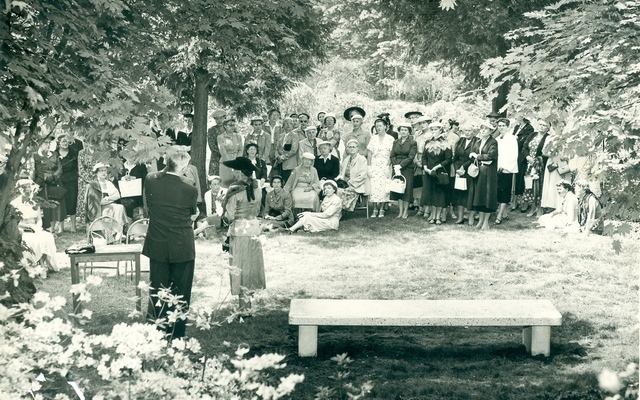 1957—A number of units band together to raise money for 12 new stone benches in the Arboretum.
1959—With the blessing of the City, University, and Foundation, the Unit Council builds the Pat Calvert Greenhouse to teach plant propagation and sell plants to support the Arboretum.
1961—Unit Council launches the Garden Guide program to assist University staff in providing free public tours of the Arboretum to children and adults.
1962—The Guided program is expanded to include tours of the Seattle Japanese Garden. Unit 86 continues to provide tours of the garden today. 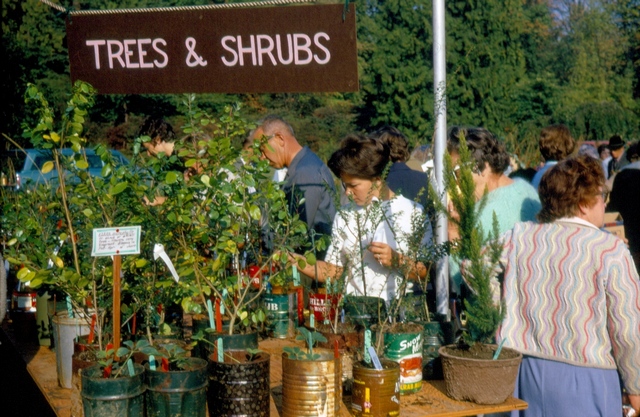 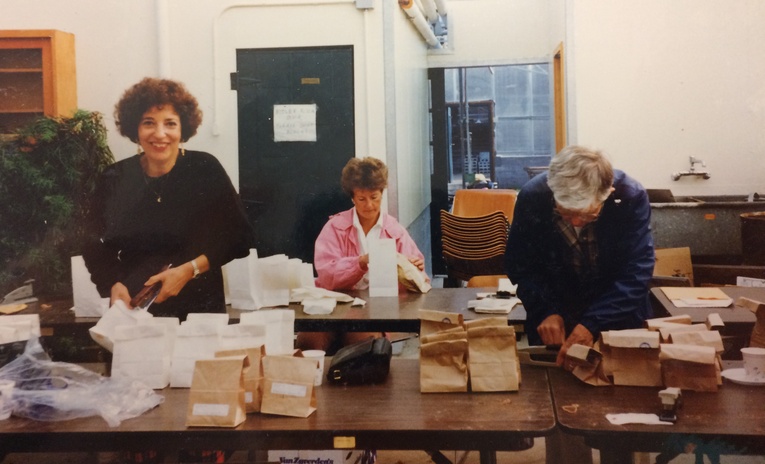 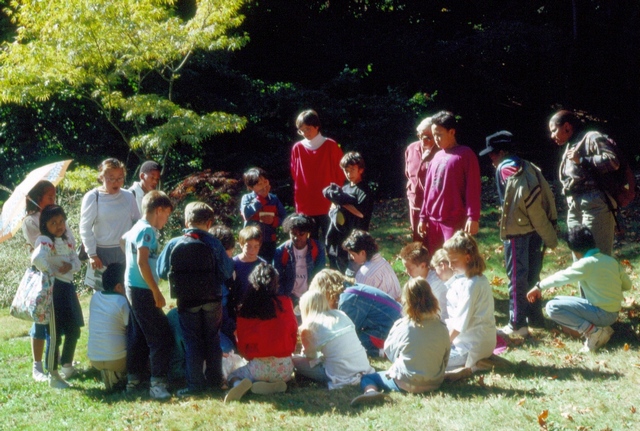