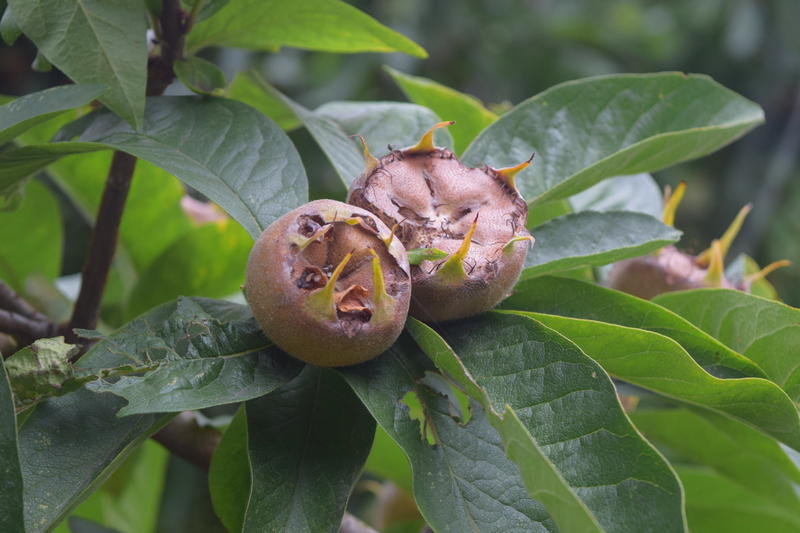 Common medlar, Mespilus germanica, is a slow-growing small tree or large shrub native from southeastern Europe to central Asia. It produces three- to six-inch-long elliptical dark green leaves that turn a lovely mix of yellow, green, red, and purple in the fall.

A member of Rosaceae, or rose family, medlar bears showy white to pinkish white rose-like flowers in late spring. By fall, these develop into inch-wide rounded brown fruits, each with a crown of persistent calyces. Immature fruits are hard and bitter. When ripe, they become soft and mushy and yield a flesh reminiscent of spicy applesauce.

The fruits are generally not picked until late autumn, after the leaves have dropped. The action of frost helps advance the bletting, or softening, process. Unripened harvested fruits can be stored in a cool dry place until they are soft enough to eat.

Medlar has been cultivated for thousands of years and was an important fruit plant in ancient Greece and Rome. Before sugar became a bulk commodity around 1500 AD, medlar provided a welcome sweet treat during the fall and winter months.

References to the fruit can be found in the works of Chaucer, Shakespeare, de Cervantes, and more. Many of these are quite bawdy and unflattering and stem from the fact that the fruit has an odd, puckered shape reminiscent of a certain body part. In Romeo and Juliet, Shakespeare refers to medlar as “open arse.” Indeed, the French common name for medlar is cul de chien, which translates to “dog’s backside.”

Medlar’s popularity revived in England during the Victorian era, when affluent households used it to create jellies and liquors for Christmas time. In recent years, medlar has been making a quiet comeback among foodies interested in forgotten or unusual fruits.

Numerous cultivars of medlar have been selected. With names like ‘Giant’ and ‘Macrocarpa’, they typically have larger, more flavorful fruits than the straight species.

Hardy from USDA Zones 5 to 8, medlar grows best in moist, fertile soil and full sun to light shade, and in locations protected from strong winds.

In the Arboretum: The park’s lone specimen is a ‘Macrocarpa’ dating back to 1957. It came to us from the Prentice Nursery (no longer in business), in Seattle, and grows along Lake Washington Boulevard, on the south end of the Holly Collection—right across the street from the Birch Parking Lot.